Thursday was the leadership portion of the conference. We started out the day in a very yummy way.

What a great way to start off your morning, huh?

After that, I learned way more than I ever wanted to know about taxes for a 501(c)(3). Thank goodness I’m not the treasurer, lol.

And lunch, you ask?

We started out with a beautifully arranged fruit platter. I’ve decided star fruit is nice to look at, but not to eat.

Then we had a Chairman’s Platter (tossed greens, cucumber, tomatoes, grilled chicken breast, roast tenderloin, & Chardonnay poached shrimp finished with thyme-raspberry dressing). Just prior to lunch, someone from the kitchen came out and showed us some bottles of Walden Farms salad dressing that they had in the kitchen, so we also had some ranch and Caesar dressing. That roll is from Rich’s/French Meadow, and it was wonderful (too bad they are only sold to institutions – I think we need to send them tons of emails).

Betty will probably kill me for this picture, but it is too funny to not post. We had a lot of swapping going on at our table – shrimp, beef, chicken, tomatoes, cucumbers – they moved around. Well David, Linda, and Holly all gave Betty their shrimp. Enough’s enough, right?

The hotel made a wonderful rice pudding for us.

I also got to try some Zensoy pudding. I thought it was pretty good. I really liked that it was not super-sweet, as some puddings tend to be.

One of the great things about the leadership day is we get updated on the GIG programs, like the Gluten-Free Certification Organization (GFCO) and the Gluten-Free Restaurant Awareness Program (GFRAP). Did you know that there are over 1300 restaurants that are now part of GFRAP? How cool is that?

My favorite part of the leadership day meetings is sharing with the other branch leaders what we do in our branches that is successful, and helping out the branches who fell less-successful in a certain area. Unfortunately, this meant I had to stand in front of everyone and talk for a little while (something I hate doing). I was a little frustrated that Bob (GIG Board President) was in the back making fun of me the whole time. But I know he loves me, lol.

The absolute best part of the leadership day is the dinner, when we all kick back, relax, and have a lot of fun getting to know each other better. This year, the dinner was hosted by Claudia Pillow at her lovely home. Claudia and her sister, Annalise Roberts, spent days preparing the feast – I can’t even tell you all the food we had (I loved the beef tenderloin the best!). I didn’t get my camera out fast enough for dinner, but I managed to snag some great dessert photos. And since this conference was “All About Food”, I decided I needed pictures of people enjoying the food. (I think the dessert recipes are all in Annalise’s cookbook, Gluten-Free Baking Classics.)

Lemon cupcake texture (yes, that is my half-eaten cupcake)

Madelyn with a lemon cupcake

Holly, NTXGIG’s kids’ leader, with a whole plateful of cupcakes

Tara and I goofing off for the camera 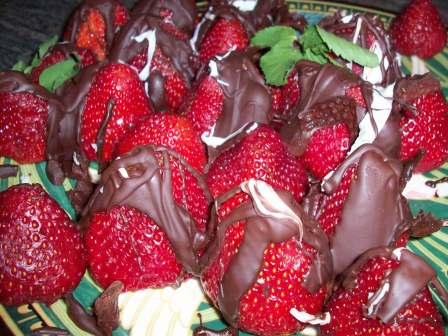 Our fearless leader, Cynthia Kupper, with icing on her nose (she is hilarious!)

The Sangria Guy and Steve Rice of Authentic Foods

After all that fun, I bet you all want to run out and start a GIG branch. Maybe I’ll see you in Seattle next year!

This entry was posted in 2008 GIG Conference, Reviews. Bookmark the permalink.